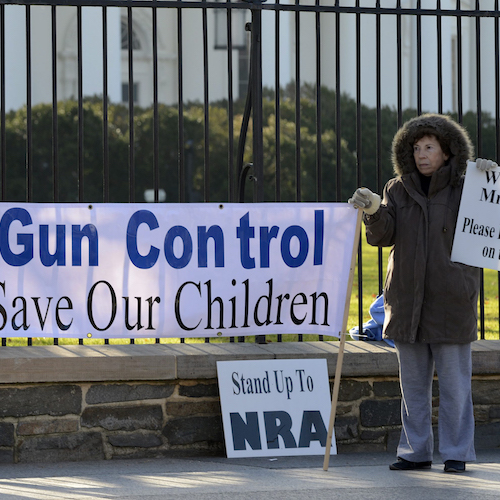 Supporters of gun control hold a sign that reads 'Gun Control Save Our Children', outside the White House in Washington DC, USA, 15 December 2012. Reports...Michael Reynolds/EPA

Today’s result is up from a negative 47 – 50 percent measure of support in a December 23, 2015, survey by the independent Quinnipiac (KWIN-uh-pe-ack) University Poll.

Support for universal background checks is itself almost universal, 97 – 2 percent, including 97 – 3 percent among gun owners. Support for gun control on other questions is at its highest level since the Quinnipiac University Poll began focusing on this issue in the wake of the Sandy Hook massacre:

“If you think Americans are largely unmoved by the mass shootings, you should think again. Support for stricter gun laws is up 19 points in little more than 2 years,” said Tim Malloy, assistant director of the Quinnipiac University Poll.

“In the last two months, some of the biggest surges in support for tightening gun laws comes from demographic groups you may not expect, independent voters, men, and whites with no college degree.”